Are You Waiting For Permission?

Are You Waiting For Permission?

Mar 12, 2012 Blog, Life Coaching Comments Off on Are You Waiting For Permission?

This past weekend I co-facilitated a training for iPEC, where we educated a group of thirty-one amazing, and open individuals on developing coaching skills.  They are either on the path to becoming a coach or they were there to learn new tools on how to maximize their leadership capacities to use in different environments and to improve their relationships with others.  You know that saying about how “we are all each other’s students and teachers”; well I definitely experienced that this past weekend.

There was a point in the weekend where I was talking about values, which are the principles we live by. It’s what drives us to take certain actions and can define what is important to us. What is important to us is unique to each and every one of us. For example one of my values is “fun.”  Although how I would define fun and what I consider to be fun may be different than what you would consider to be fun. One isn’t more right than the other, it’s just what we value and how others can learn more about who we are and how we represent ourselves.

Before I started talking about this section during the training, there was some music playing, specifically a song called “Build Me Up Buttercup” by The Foundations. That song is one of those songs, you know which kind I’m talking about, where you just find yourself singing and dancing a little goofy and ultimately having fun. I noticed people smiling and laughing as my co-facilitator and I, Keith Miller, started to do an impromptu dance routine. 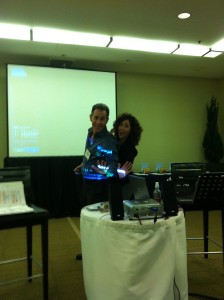 Fast forward back to the values section where the participants were asked to create a list of values and to use descriptive words that are an essence of who they are. The examples I shared about myself were: honest, non-judgment, intuitive, creative, and of course fun.  There was more to the exercise but part of it was that they were instructed to use these words and values to create “I am” statements about themselves such as “I am intuitive” and then to a noun to say “I am intuition” which has it sink in differently.

These “I am” statements become a representation of who we truly are.  A great way to use them is to consider how you are making choices in life – are you making choices based on your values or based on someone else’s values? When we were having this discussion during the training I had an Aha! moment.

What I realized is that the examples I gave, I had written down years before when I took the coaching certification program myself, and that I may not have been living up to that value of fun that I find so important. Although in the moment I questioned it, I realized that there are moments when I do, and that when I experience spontaneous moments of fun, IT IS fun!  In fact, I had just had one of those moments before dancing to the Buttercup song.

In reflection, I just allowed it. I didn’t think about why I shouldn’t, or who would make fun of me, or if I would look silly.  In that split second I gave myself permission – in this case to have fun. In fact in talking about this with the group, one of the participants raised her hand and shared that because I was talking about it and when I said the word “silly” she realized that one of her values was being silly so she is now going to give herself permission to be silly.

If you got clear about your values and created some “I am” statements for yourself, how would that influence your decisions? If you’re waiting for permission to take the time to get to know yourself in that way, here it is: “I give you (your name goes here), permission to know you, to honor you and to be you.” Or…right now you can give yourself permission. Try it on and see what that feels like, and I bet you’re going to like it.