Are You One of the Lucky Ones?

Are You One of the Lucky Ones?

It’s March already people, and I can’t believe that it’s already March! I just read an inspirational email from Richard Simmons whose classes I was taking for a while. If you get a chance, you must, he’s hilarious and I think it’s the most fun I’ve ever had working out and breaking a mean sweat. In fact this is reminder to myself to mark in my calendar when I can take his class next. 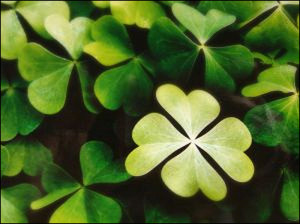 In his fun and silly email he touched upon a topic that I all too often hear being mentioned, which is this idea of “luck.”  He also touched upon the wearing of the color green. I don’t know about you but I personally don’t like it when people take it upon themselves to pinch me, me being someone they either don’t know or barely know at all, especially kids. Although I can imagine how fun it is to pinch an adult especially when they don’t know me, or any adult for that matter and you’re a kid.

Okay I’m going to say it, I personally don’t believe in luck. The way most people use the concept or idea of luck, only leaves room for one to assume that either you are lucky or you’re not, or that you’re either born lucky or you’re not. That doesn’t leave much possibility for one to become lucky if they weren’t lucky to begin with.

So I would much rather believe in the power of the unconscious mind. I know, it doesn’t sound as much fun as believing in the idea of luck or one who is just plain lucky, but it’s actually even better. I’ll explain but first I wanted to ask you, “did you know that the original color of St. Patrick was actually blue?” There is so much one can learn on Wikipedia, it’s amazing.

Including information about luck. Depending on one’s culture, spiritual beliefs or generational family beliefs, how you relate to luck may differ.  On Wikipedia it says that luck or fortuity is good or bad fortune in life caused by accident or chance, and attributed by some to reasons of faith or superstition, which happens beyond a person’s control. I’m personally not a superstitious person and in regards to control, I know the only thing we can control is…yes you guessed it…our thoughts.

So assuming that the only thing we can control is our thoughts, then why not believe in luck? It has to do with the power of our unconscious mind. I take my clients through a session or two where we go over the Prime Directives of the Unconscious Mind, or in essence, what it does, how it works, and what is important to it. I do this towards the beginning of our time together as I like to make it conversational and this time together is usually pretty revealing.

What happens is little light bulbs start to go off for the client such as “oh that’s why I think about these things”, or “now I understand why I have a tendency to focus on that”, or “that makes sense now why I do certain things.”  I also learn a lot about them to know what beliefs, past memories, and interpretations they are having that are getting in their way of having what they want and being truly happy. It actually turns out to be a really fun session.

One thing about your unconscious is that it generates, stores, distributes, and transmits “energy” and it usually does so in the form of a thought. To me this is the scientific basis behind the law of attraction as well as the idea around manifestation. Most of us are visual so we also tend to create pictures in our mind using our imagination whenever we think about something.

It’s also important to know that there is a part of our brain that can’t tell the difference between what is real and what is imagined, it’s a part of the Limbic system. When using our imagination in this way, we then either attract or manifest that which happens in our life. So when you assume the worst and that you’re unlucky, how is it that you might be using your thoughts, what you focus on and your brain to support what you really want to get out of life? The habit that most people have is focusing on what you don’t want, and by focusing on what you don’t want, guess what you are most likely going to get? In using pictures in your mind that support this thinking, what are you then creating or manifesting? Are you getting this?

Also on the Wikipedia page for luck, there is a section called “Luck as a self fulfilling prophecy.” This is where Jean-Paul Sartre and Sigmund Freud are mentioned who in essence feel that a belief in luck has more to do with what people think they can control (or not control) in their life as well as the subsequent escape from personal responsibility.  What we think about can impact what we focus on.  The same is true for that which we habitually focus on, can impact what we are thinking about the most. You get what you focus on so focus on what you want! You don’t need any such luck for that. This is all…just a thought.